Those of you who know me well know that I have very strong obsessive tendencies.  Just one more reason why my wife says I’m complicated. They tend to be seasonal and if over-indulged they can cause a negative affect on my life.  But I am what I am, and I’m not sure that there’s anything that can be done with it except enjoy the ride.

I’ve dedicated an entire post to the movie Carrie.  My obsession with this film is unhealthy at best.  I have rules about watching it or even thinking about it because otherwise I will ruin myself and the movie.  I can only watch this movie in October.  I can watch it twice.  And the moment Halloween is over, I must put it away until the next year.

I’ve expounded in great detail on why this is the case in Some Thoughts on the Movie “Carrie” – An Obsession, but what it comes down to is that every year I feel that she may finally make it through the prom without humiliation and destruction.  Her life is finally coming together when Tommy takes her to the prom and perhaps even falls in love with her.  Things are really turning around, but of course I know how it will end;  a telekinetic mass murder.   ‘

Also of note is Piper Laurie as Carrie’s mother.  Her performance is so spot on…I’ll stop there, and say that the music is also a huge part of this.  I’ve listened to Pino Dinaggio’s score dozens and dozens of times.

This film has a massive cult following, and I’m right there with them.  It’s a movie about a man who becomes obsessed with a woman from the early 20th century so much so that he finds a way to metaphysically travel back in time to have a love affair with her.  It ruins both of their lives.

John Barry’s score really captures the obsession, and every time I listen to it totally derails my day.  I don’t watch very often because it has a profoundly disturbing affect on me.  Christopher Reeve and Jane Seymour are absolutely perfect.

The question always remains, where does the pocket watch come from?  She gives it to him as an old lady.  He gives it back to her as a young lady.  But he got it from her to begin with.  It’s a mystery.

Damien Rice is and Irish singer songwriter.  His melodies are powerful and his lyrics often reflect an obsession with his backup singer Lisa Hannigan . 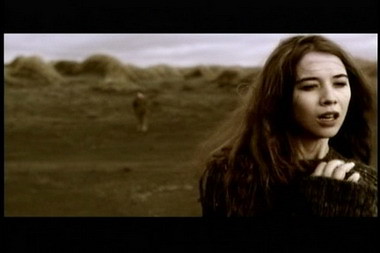 He may be the best sad song writer in modern times, and I love sad songs.  They help me express the darker parts of myself.  His obsessions are very contagious, and so I also have rules about listening to him.  I do have trouble keeping them.  I should never listen to him when I’m depressed.  I can never listen to one of his songs back to back, otherwise it will become an earworm.

This was the first opera I loved, and my favorite to this day.  It is by far Umberto Giordano’s greatest work.  I came to know it at KU’s Midwestern Music Camp.  We played a medley of it in the band, and I immediately became obsessed with it.  I found the album in the KU music library with Jose Carreras, Eva Marton, and Giorgio Zancanarro.  I listened to it straight through 3 or 4 times, and bought it when I came home.

It’s the story of a French poet during the French Revolution who falls in love with an aristocratic girl  in hiding (Madellena).  Carlo Gerard, a prominent figure in the revolution and former majordomo for Madellena’s former home , is also in love with her and is in a position to put Chenier to death.  The girl assumes another woman’s identity so that she can be executed along with Chenier.

The music is out of this world good.  No opera has as many beautiful and powerful arias and duets as this…at least for my obsessive tastes.

I have a degree in voice, so naturally I’m interested in my voice.  But my interest falls into the realm of obsession.  I’m never fully satisfied with it.  I work obsessively to make it better.  I obsess with vocal health.  On days when my voice isn’t working well, it affects my mood.  I take very expensive acid reflux medicine because if I don’t my voice will suffer.  My wife is a better singer than me in many ways and yet she doesn’t think about it at all.  She just sings when she wants to sing.  She’s learned to live with my obsessions, but I’m sure it drives her nuts.

This movie is an obsessive’s obsessive movie.  It is a movie about obsession to the core.  Everything about it is obsession.  Jimmy Stewart plays a retired detective with a debilitating case of Vertigo.  He’s hired to track an old friend’s wife who has been acting very strangely.  It’s the start of a powerful obsession for her that can only end in tragedy.  And the two things that really clinch the deal is the stunning Kim Novak and this theme.

I think that some people are more prone to obsessiveness and I’ve got it bad.  It’s a double edged sword.  In some ways my life is richer for having passions, but in other ways it really messes me up.  Like blogging, for example.  Once I get into, it’s very hard to stop.